Muslim Etiquette in Istanbul - No Touching Men in Turkish Bazaars 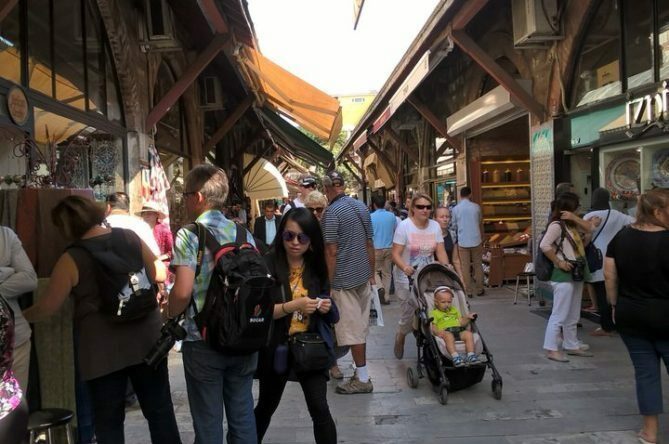 sThere is Muslim Etiquette to be aware of when you travel and shop in Turkey. Muslim men can’t pray without washing after touching a woman. Therefore Muslim Etiquette Requires – No Touching Men in Turkish Bazaars if you are shopping in the Bazaars.

At the Arasta Bazaar, where ‘by Moses’ the shop is located, Zeki works there. Hanging out at the store brought me in close contact with people who worked there. I was especially close to Zeki. from my point of view I was his adopted mother. Sometimes, I accidently touched Zeki.

No Touching Men in Turkish Bazaars

“Muslim Etiquette Requires – No Touching Men in Turkish Bazaars,” Zeki said. But, it never caused a problem before that summer in Istanbul. The reason why in previous years, it wasn’t a problem is Zeki had become more religious and an observant Muslim.  Some men may want you to touch them. But for Zeki, this was the rule he followed. “No Touching Men in Turkish Bazaars,” Zeki said. It wasn’t his rule. It was based on his beliefs. It’s good to know when you are shopping that There are Unspoken Rules in Turkey and in the Muslim culture you might not know unless you are Muslim.

I never knew that casually touching people of the opposite sex could be a problem. But it is a problem because some Muslim men can’t pray without washing after they have been touched by a woman. Maybe this is why in Istanbul some people prefer to work with people of the same gender. They do this so that they don’t accidentally touch the opposite sex and become unclean. Even men and women shaking hands is forbidden. Muslim culture and religious teaching require these rules to be followed if you are an observant Muslim.

This doesn’t happen in the USA. Or I should say, I haven’t run into it in my community. In my world, men and women work together, equally. Men and women touch by accident as well as on purpose. Maybe this touching issue is why some Muslim woman ‘cover’ from head to toe and wear gloves. Maybe they cover to prevent accidental touches – so they don’t accidentally touch men. so be aware some Muslim etiquette requires no touch men while shopping or in any situation unless you are married to the man if you are a woman.

What Gives with No-touching?

I think that when a woman completely covers herself, it may be out of respect for the men and not to inconvenience them, avoiding the possibility of requiring him to wash again.

If you believe you need to wash before you pray, then washing is an honor

Me at By Moses

It’s hard for me to grasp this point of view. My reaction reflects my personal beliefs.  I believe someone else’s behavior isn’t my choice, but theirs. I also think accidents happen sometimes. No one is responsible for an accident.

If I make a deal with God, that is my choice. I am the only one accountable for my choice. Zeki believed that if he touches a woman on purpose or by accident, then he has to wash before he can pray. It seems if  Zeki wants to make a covenant with God; only Zeki can keep it, and only his choices matter.

First I want to say I greatly respect his beliefs. I just do not wish to be linked to someone else’s divine spiritual path, salvation and entry to the Gates to Heaven. It’s too much responsibility for me.

Zeki suggested I wear gloves to solve the problem. I suggested he wear long-sleeved shirts. He continued wearing t-shirts. I didn’t wear gloves.

Gloves on me in the shop sure would look strange

Travel tip: Muslim men may insist that Muslim Etiquette -No Touching Men in Turkish Bazaars is a requirement to shop in their store.

So when you travel to a Muslim country — don’t offer your hand to shake hands and don’t go around touching men, by accident or on purpose. This is a good rule to follow and easy to do if you aren’t standing next to the same person all day.

← Previous Story Travel – The Arasta Bazaar, Istanbul, Turkey
Next Story → How to Deal with Conflict When Shopping Istanbul