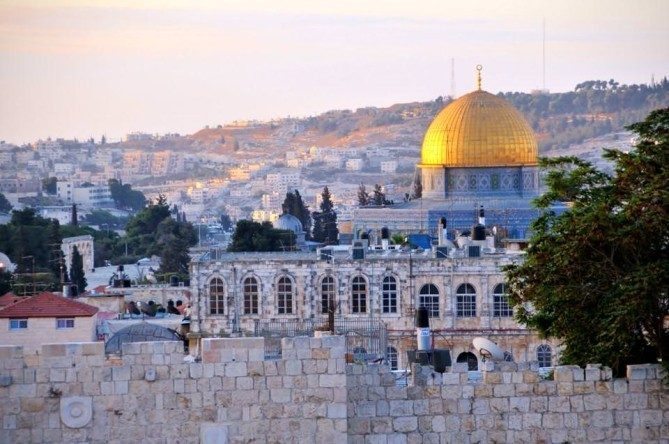 I think it is complicated and intense because of the emotions it stirs. It is somewhat surreal. Consider this simple question “In what country is Jerusalem?” The answer is complicated even for governments and courts. the only way to describe it fro my point of view is Jerusalem is complicated, intense.

First of all, consider this simple question “In what country is Jerusalem?”  The response that The UN, The State Department, the Israeli and Palestinian government would all give a slightly different answer. Finally, the answer is different for each of them. Both Israel and Palestine dispute Jerusalem. The complicated issues are the basis for the dispute. Jerusalem is a place where nothing is simple. But, Jerusalem simply beautiful inspires everyone.

Nothing is simple here. From the rules of the road, what to eat, and who to hang out with in Jerusalem. Even the US Supreme Court decision on “In what country is Jerusalem?”  is complex. Here is the Court’s view.  US Supreme Court weighs in on Jerusalem. Therefore everything is complicated when it comes to Jerusalem.

Jerusalem an emotionally powerful place is historical. It is loud like India or Cairo Egypt. Jersulam feels chaotic. Jerusalem is very crowded and in a rush. I see zealots, religious extremism, and soldiers making random inspections with guns drawn. Because of the political undercurrent, therefore, Jerusalem is intense. 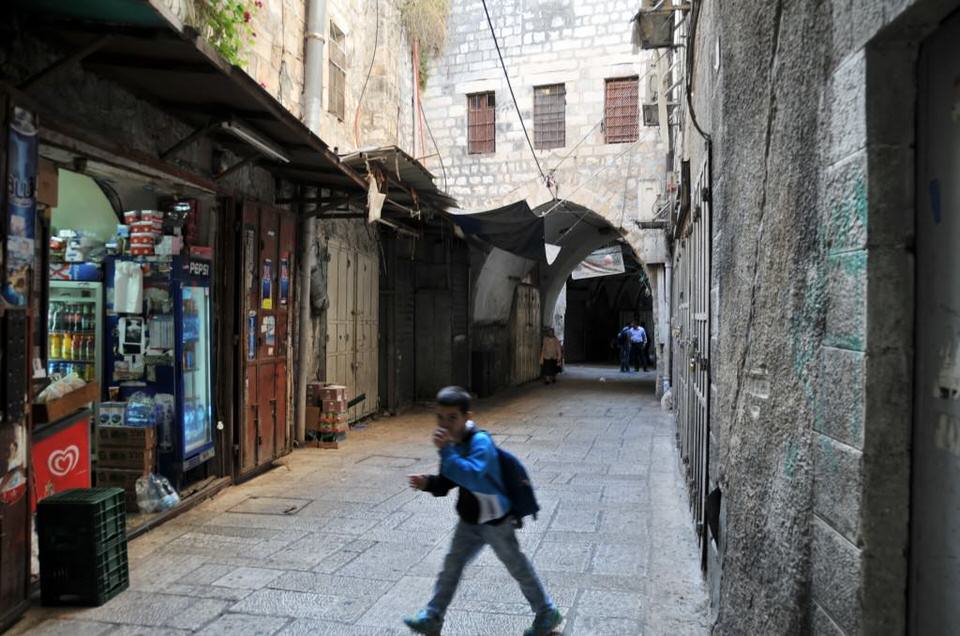 The More I Learn the Less I Know

The more I learned, the less I understood. The tension goes back to an old feud between cousins, Ishmael, and Esau. The tension in the city tied to the cousins’ claim to Jerusalem and Palestine or modern day Israel.

During my visit to Jerusalem, the sweltering weather added to my discomfort. As a result of the war that just ended tension is high in the walled city. During the war, the Israeli and Palestinian lost lives, but the war hadn’t resolve anything. While, another war solved nothing but increasing tensions.

As a result of the war, Israeli’s heightening security. Further frustrated, Israel’s bad economy and drop in tourism increased tensions. In other words, the high stress increased security. Because Israeli soldiers stoning at the Dome of the Rock, Israeli soldiers tightened security on buses. All public places in Jerusalem were ready for trouble. Therefore, Jerusalem felt complicated and intense to a visitor like me.

So to ‘fit’- in Jerusalem, I learned Jerusalem’s rules. Additionally, my travel is more complicated than usual because my visit is during Rosh Hashana, Yom Kipper, and the Sabbath. Unfortunately, I didn’t know Jewish religious law determines the whole country’s legal system. Because of this, I learned that Jewish religious laws regulate civil laws and government. But, I learned the rules, and had an incredible trip, regardless of the laws.

Jerusalem is a tiny walled town. You can spend a lot of time in Jerusalem. After I asked a million questions, I understand Israel’s rules. Because I learned the rules, I avoided many social, cultural and legal mistakes.

Nevertheless, my goal to photograph Jerusalem, Israel, and Palestine is the purpose of my trip. No one photographs all of this region in one trip. However, I accomplished a lot of my goals. I saw the sites on my ‘must see’ list and saw some others that were not on the list.

Jerusalem historical and Biblical sights are the cities attractions. Regardless of why people come, the more you see, the more you learn. Therefore, Jerusalem is a fascinating experience. By immersing yourself, you learn things about yourself.

Plan to spend at least one full day in Jerusalem. An optimal visit in Jerusalem is about two or three days.

Additionally, make sure to leave time to chat and get to know the local people. Since the people are generous with their time they share their sites, social and cultural tips that only locals can. 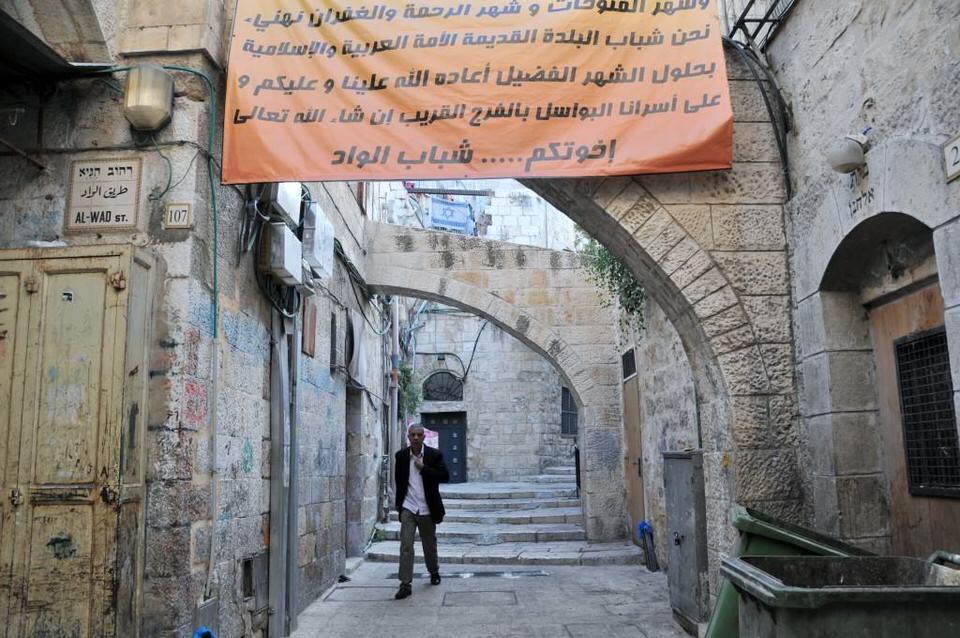 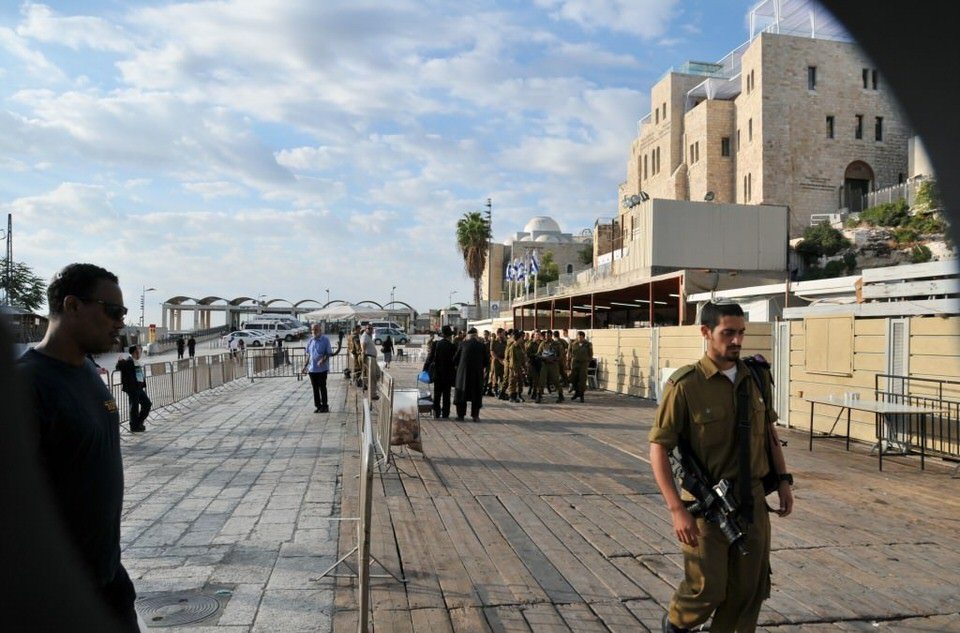 My Mulsim guide is Zafer Barakat. He is a Christian and Muslim religious heritage and history guide.

We dressed for sightseeing. For me, travel dress is a long skirt, long-sleeved white linen shirt, white long scarf and flat walking shoes, and never wear sneakers. As a result, I am completely covered.

Ready to see the sites, we left for the tour. My camera is the only thing I carry.

My guide is well dressed in a pressed shirt and business casual attire he looked very professional and made a great impression. Zafer brought a Bible and walked with it under his arm. His goal is to help me enter the Dome of the Rock.

Unfortunately, non-Muslims are not permitted to go in to the Mosque. It’s not allowed according to Islam law, modern tradition, and safety concerns. Since my guide knew this, his determination drove him even harder to get me into the Mosque. 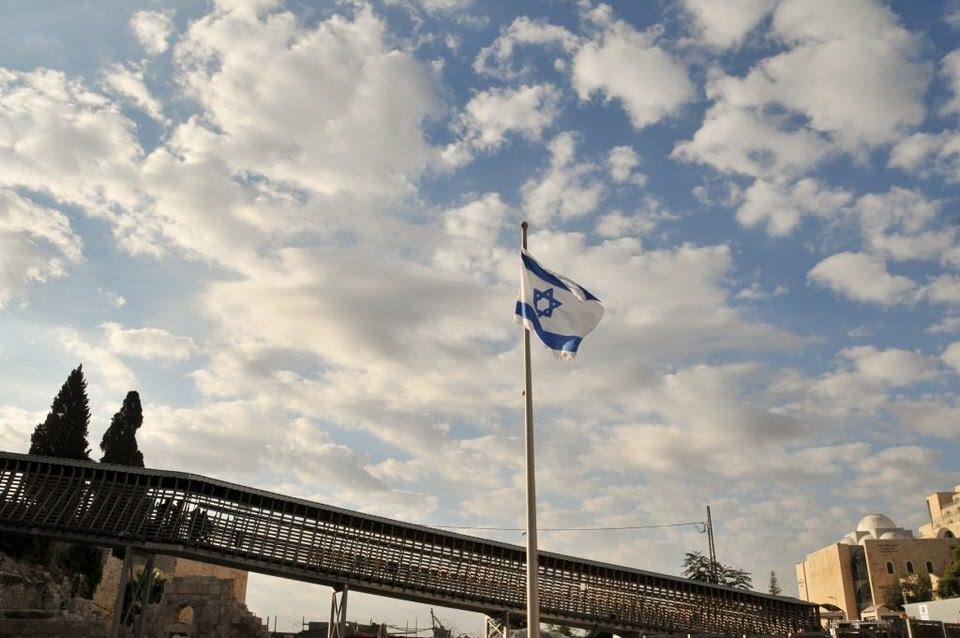 My Day Seeing the Sites

His second goal is a tour of the significant Christian sites. He points out Jewish sites but only as we walk by them, and only in passing.

The Temple Mount (Haram Es Sharif), Dome of the Rock is a complicated like everything in Jerusalem. A reason Jerusalem is complicated is because three world religions claim the site.

Then Solomon began to build the Temple of the Lord in Jerusalem on Mount Moriah. It was on the threshing-floor of Araunah the Jebusite, the place provided by David, his father.”
– 2 Chronicles 3:1

“Glory be to Him who did take His servant for a Journey by night from the Sacred Sanctuary to the farthest Sanctuary, whose precincts We did bless….”
– The Koran, Sura Al-Isra’ 17:1

I want to catch the incredible light, so we are up at dawn. We walk through the Arab section, past the Wailing Wall. I was in awe. At dawn, along the Wailing Wall, we see people praying in the mystical morning light.

Past the praying at the Wall, we walk by the holy spot. I almost didn’t understand what I’m watching because my guide said nothing to me. At that moment, I realized, this is the Wailing Wall and I almost missed it.

Now, a little past dawn, we continue to walk past the only remaining part of the Great Temple. We turn the corner and enter the Temple Mount (Haram Es Sharif). 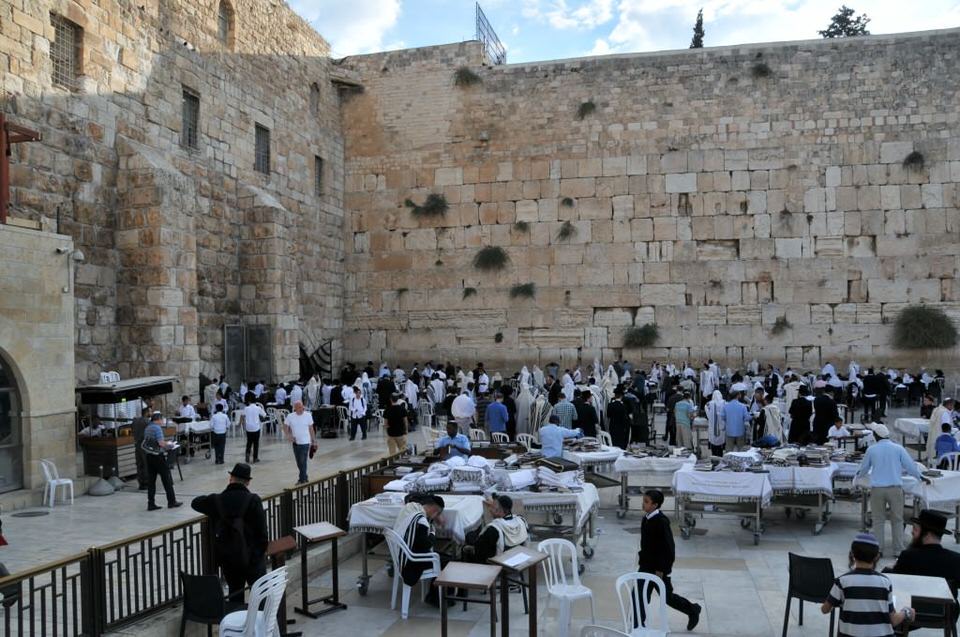 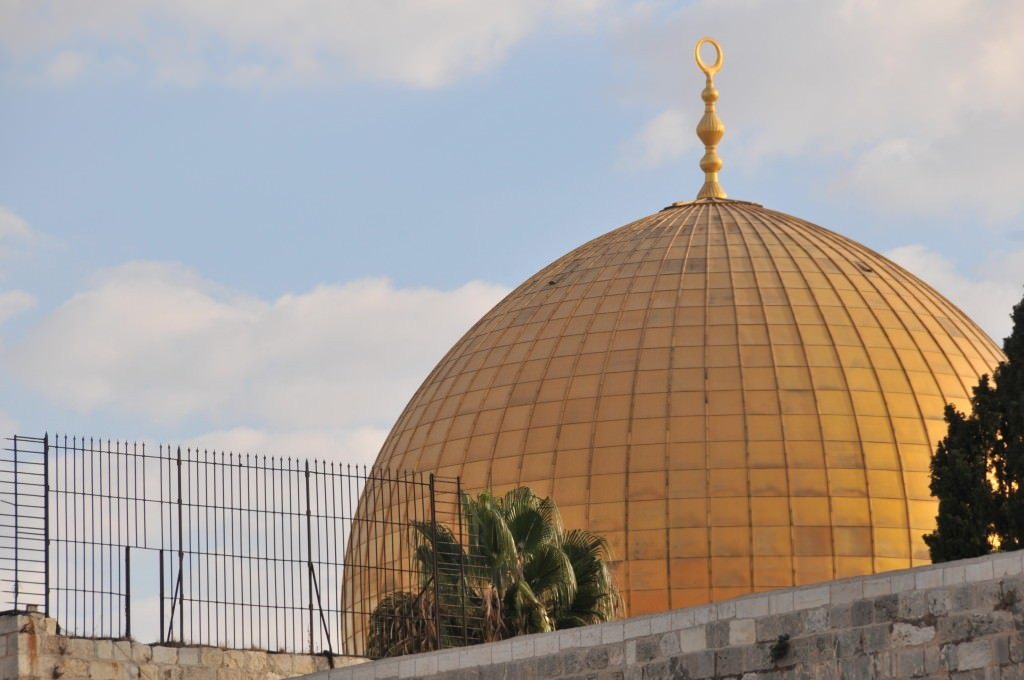 We Walk – Past Security 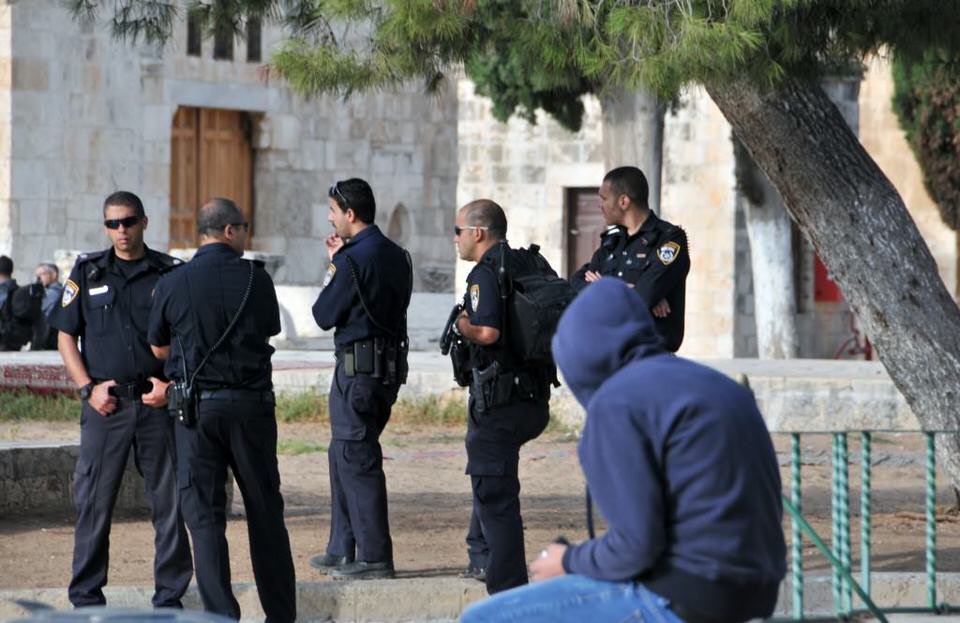 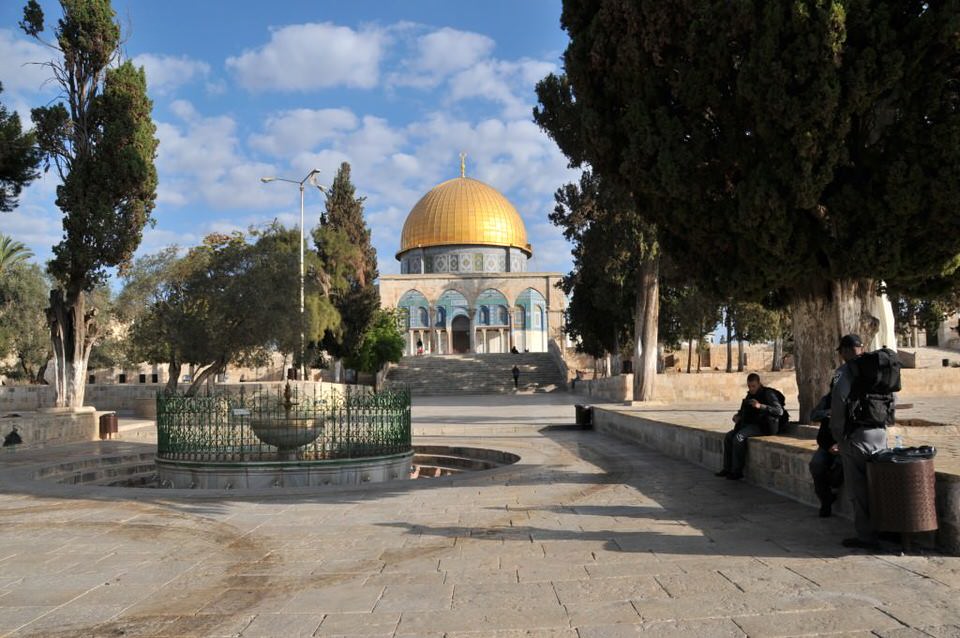 The Dome of the Rock is one of four buildings on the site. We see we are the first to arrive – no tourists anywhere. Between prayer times, our chances are better for seeing the Mosque inside. 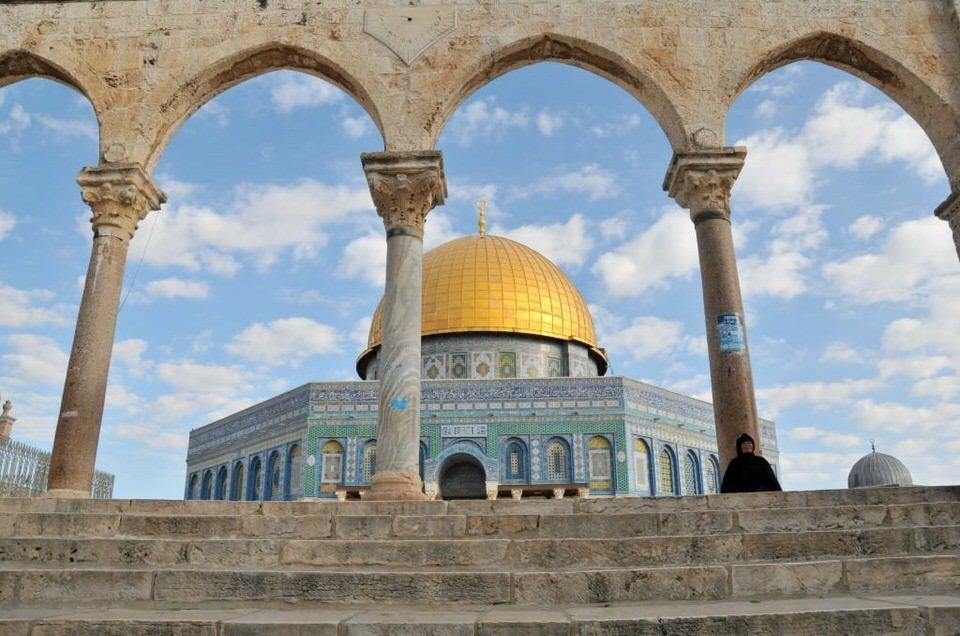 The Temple Mount (Haram Es Sharif) and Dome of the Rock

Unbelievably, sometimes non-Muslims enter the Holy Mosque. Typically, visitors only see the outside of the Mosques on this site.

Something interesting. Look at the photo.

Do you see the man in black? I wonder who he is?

Why is he dressed all black?

First of all, who is he? Is he from the DaVinci Code.

Quietly, we move into the courtyard. 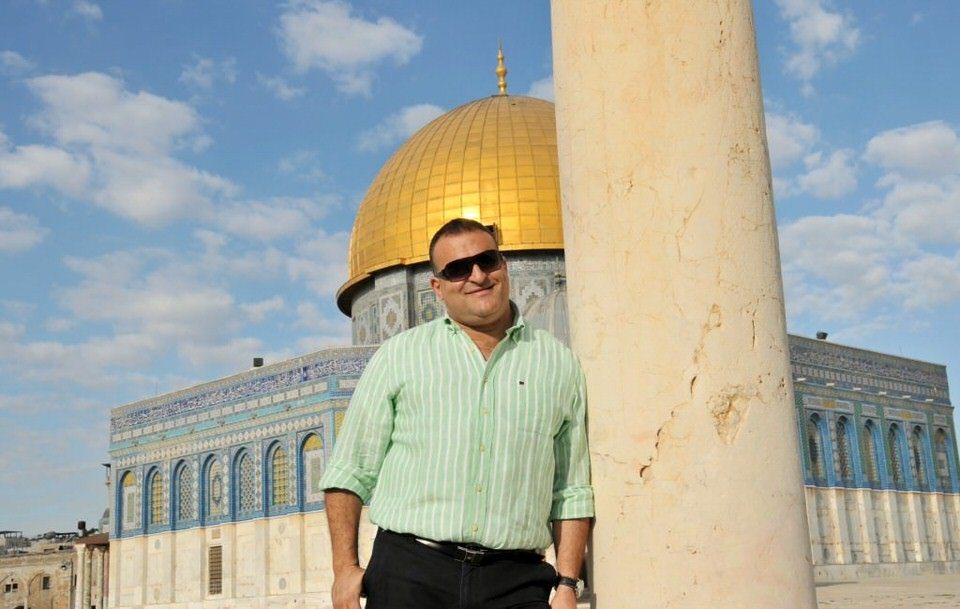 Jerusalem Complicated and Intense – Speaking to the Guard

Cautiously, Zafer hands his Bible to me.

Put the Bible in my purse. He says.

I do. He walks through the whole square sizing up the situation before approaching the guard.

He walks through the whole square sizing up the situation before approaching the guard.

First of all, Zafar speaks to the guard in Arabic. The conversation is polite chit chat. Yet, he smiles until they are both laughing. To me, it is almost like, the men are joking. He smiles more. I smile, the guard and I don’t make eye contact. Then, I look down away from the guards eyes, out of respect to the guard. As I listen, I understand a few words, but unfortunately, not many.

The guard asks me a question. Probably, my fatal mistake is I answer in English. Maybe because of this, the tone of the conversation changes. As a result, any chance of entering the Mosque ends. Zafer talks quietly, then some more. He smiles, laughs and says, politely, “Salam (Goodbye)” to the guard. 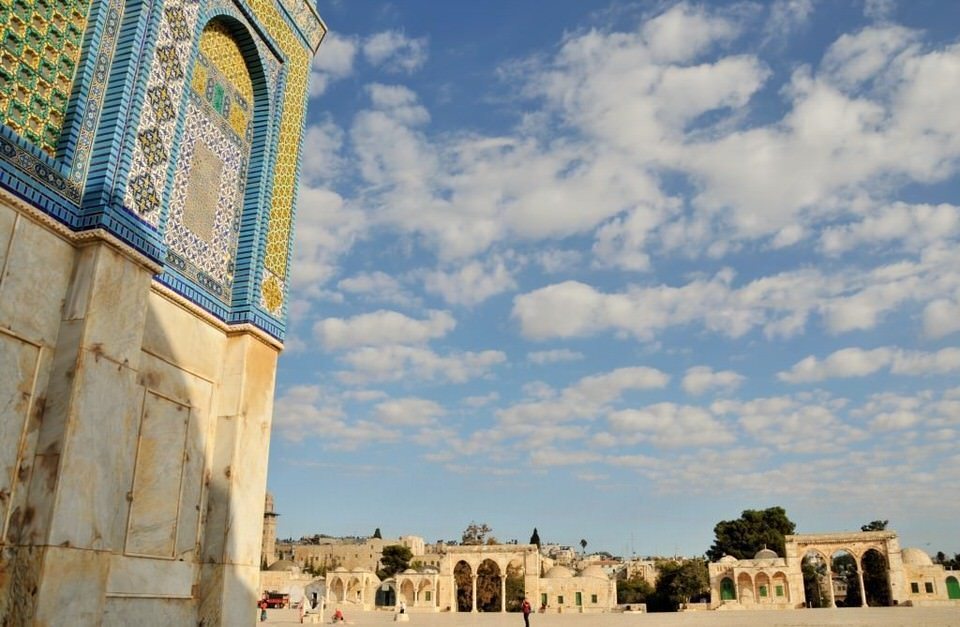 Zafar takes my arm as we walk away. I continue taking pictures. Although I didn’t get in, I am happy. We tried. The people in the courtyard study in the huge courtyard.

The Holy Mosque area is a great experience. For the rest of the day, the best of Jerusalem is mine. We continue through the old Arab quarters.

Can you imagine going to the Vatican in Rome and finding only Christians welcome?

Because I am Christian, I can’t enter the Mosque.

To me, sectarianism is hard to understand. How is one person any more or less worthy than another person to enter a building? Unfortunately, entrance to Mosques, some Orthodox churches, and sacred place are restricted to women and non-believers.

After visiting Jerusalem, I am grateful that all people are equals. Everyone is equal. 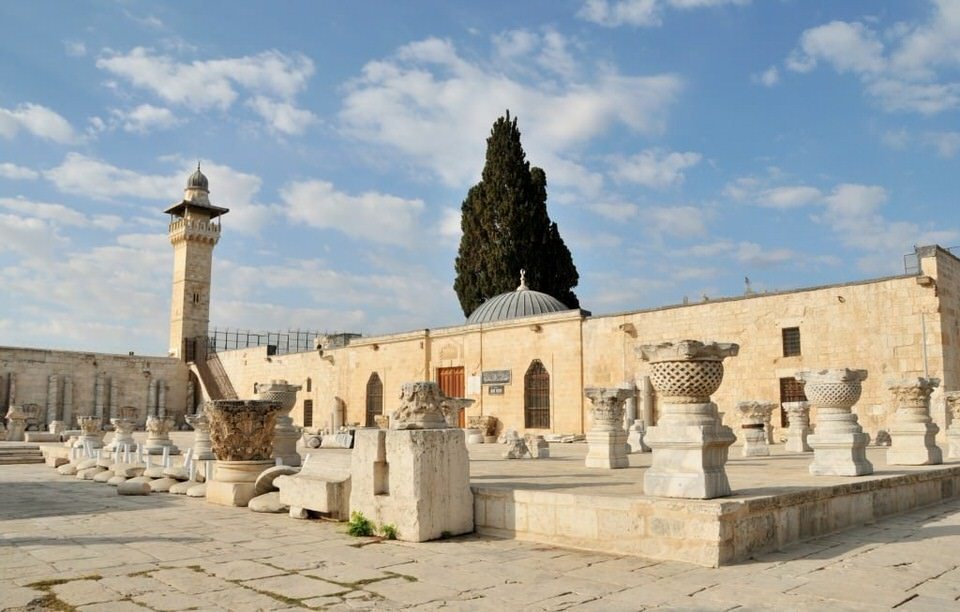 Therefore, it seems like and my hope is my photos illustrate why I think Jerusalem is complicated and intense.