How to Avoid Turkish Gigolos, Istanbul Sex Business and the Cons 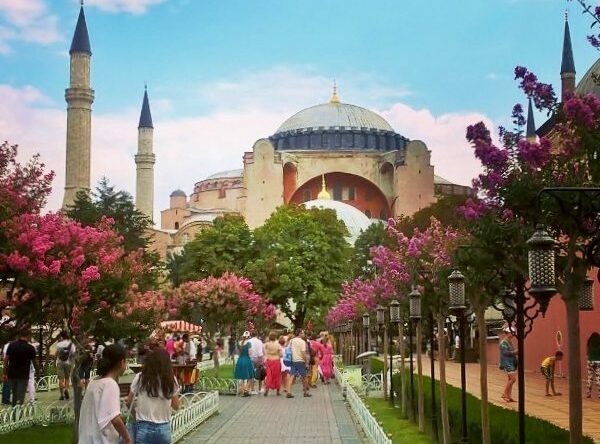 Each morning, my Ottoman breakfast had lots of sweets, a hardboiled egg, cheese, maybe some Turkish hummus and bread. If I asked for fresh fruit, that is when the drama started. So to avoid the Turkish drama, I stopped asking for fruit. My advice is to watch out for Istanbul Street Vendors who are Gigolos and sometimes even stranger than that.

Turkish Drama or How to Avoid Gigolos

The meat at my breakfast, processed luncheon meat, isn’t my favorite food, and it reminds me of the street vendors in Istanbul. The merchandise is fake, and the street vendors pretend to be people they are not – such as single when they are married. My breakfast coffee tasted like instant coffee. The juice was processed juice that tasted like Kool-Aid. So I head to Starbucks for a cup of real coffee and realize the Gigolos and Street people are as fake as my breakfast. Out on the street on the way to Starbucks, I would run into more of the Turkish drama and learned how to Avoid Gigolos.

My Story about How to Avoid Gigolos in Istanbul

Each morning when I was in Istanbul, I went to Starbucks to have my breakfast. First I would go to the Sultanahmet’s Starbucks for a Dupio Expresso in a vente glass, with ice. Sometimes I went for medicine in Istanbul. That was when it started, the Turkish drama.

Many Forms of Turkish Drama

The guys at the bazaar and hotel were genuinely concerned for me. They thought I would make myself sick drinking a cold drink like iced coffee each morning. Eventually, I did get sick. Whether it was the power of suggestion or just germs, I got very sick.

From Starbucks, I usually walked through Sultanahmet Park to the Hippodrome, past the German Fountain. Along the way, I would see the gigolos, carpet salesmen, booksellers, and illegal cruise vendors. These cruises are illegal because the business, the employees, and the tour boats aren’t registered. They are operating without working papers. I hear the safety of these cruise boats is questionable. The tour boats look like they might sink.

By the way, most of the street vendors are men, but not always. One time a woman tried to sell me a boat tour. She was from Syria — I found out that the Syrians were working anywhere they could. They didn’t need work papers like other refugees and immigrants.

It is an equal-opportunity street scene

I nicknamed one street vendor Bosporus Man. He is in the photo, in the light blue shirt. He is the tall guy.

This group of men works as street vendors selling the illegal boat tours. Unspoken rules mark their sales territory. They are allowed to work out of a storefront, but not on the street. It’s like they are trying to grab customers from the street.

Usually, the photos I snapped on my way to work would become my posts on Instagram and Facebook. I thought this made me more social and I felt connected to my friends whenever I got a like or comment.

My posts were usually photos of historic sites, buildings, and romantic scenes. Sometimes the pictures were about the street people scene. Below the image shows the street-scene, the salesmen at their office, selling illegally to customers. (out-of-focus intentionally.) 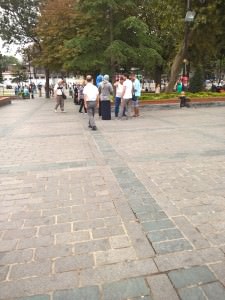 Every day, no matter when I walked down the street from Starbucks through the park to the Arasta Bazaar, the street vendors acted like they had never seen me before. Trust me – bright as they are, they recognized and remembered me. They have people smarts, people skills. I like them; they add local color to Istanbul, a flavor which gives Istanbul the title of the city with the best-coiffed men. But these men are mostly gigolos.

Some of their pick-up lines are:
“The Blue Mosque is closed today.”
“May I help you?”
“Yes, please?”
“Are you lost?”
“Can I practice English with you?”

Don’t waste your time talking to them

They can turn from nice to mean very fast.

One day I replied. “I am just walking down the street, do I look like I need help?” Yes, I was rude, maybe naïve. It gets annoying.

The four things you should moderate. Watch what you are wearing and how confident you are. Gigolos identify you as a possible client by your:

If you don’t want his attention, think carefully about what you wear, who you look at and don’t speak when they talk to you.

They say the street men can tell where you are from by the way you walk. I tried to dress like a local. They guessed I was from the USA, Spain, Italy or France. Maybe they were just guessing and hoping they were lucky. Maybe it was my blonde hair. Who knows?

When the men want to escape from talking to you, they get on their cell phones and ignore you.

Watch out for Turkish gigolos, Turkish drama, and street hospitality

The ‘street scene’ is primarily made up of the gigolo – lover boy-men who are working the streets of Sultanahmet hunting for an unknowing woman. They try to pick up young girls or older women 50+ who will then buy lots of overpriced stuff from them and their friends. Then they tell the women they want to be their boyfriends. His intention translates to, “I want to have sex with you, and I want you to buy me presents and give me money.”

Many Turkish men believe women come to Turkey for a sex vacation and that they want to sleep with Turkish men as part of their vacation experience. Maybe some do. The men often get angry and storm off if you say no. They hate rejection. Don’t worry; they are just moving on to the next woman.

One day, when I didn’t answer a question spoken to me in English, one of the men on the street loudly called me a liar and scampered off. To me, he looked a little old to be a gigolo.

Here is an example of an old loverboy, gigolo and a carpet salesmen 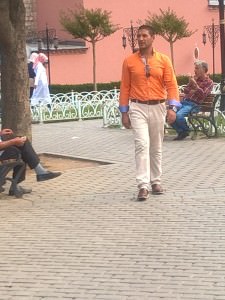 The man in the orange shirt has a good temper, and he finally got me to react. I wasn’t too happy.

The picture is out of focus because I was keeping my safe distance and walking. No more Turkish drama for me.

If you are down by this area, you will see lots of men in persona. The Lover boy-men are pretending to be characters that you will like. You will see the businessman, (this is a politically incorrect term, but I use it because that is how they use the word.) The student, the ‘stud,’ and the rock star, they are in character and acting out the street drama for your benefit.

On a side note, one time A friend of mine who is a cop – walked with me through the street and pointed out all the characters they were playing. It was actually sad to think people did this to tourist.

The men want you to feel flattered so that they can hook up with you. They may even pawn you off on their friends. I know this is true because it happened to my friend. Be aware that it’s a scam. They want your money – so hang on tightly to your money and avoid the Turkish drama when you can.

← Previous Story Where and How My Story Begins
Next Story → Shopping Arasta Bazaar in Istanbul, Turkey