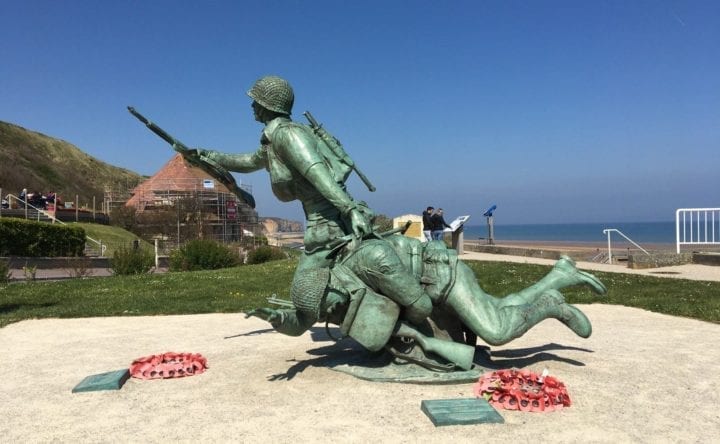 My ship pulled into LeHavre, France in May of 2017. The early morning was chilly and sunny. As a Solo traveler, I visited Utah and Omaha Beaches. My father, who passed last August, was a career naval officer. I thought of him as I readied myself for the tour and departed as a Solo traveler.

I used the tour company Bayeux Shuttle from LeHavre. A small van, holding about eight people, took us to Normandy in about two hours. Advertised as a “multimedia” affair, and yet the driver provided virtually no commentary during the two-hour drive over and back, so I don’t recommend this tour for the sake of learning history or a great experience. If pressured for time, then the transport from LeHavre to Normandy and back is worth the $130 USD

The driver provided a pretty good history lesson at both Utah and Omaha beaches. Lunch was excellent and included at a restaurant overlooking the beach.

Leaving LeHavre and driving to Normandy is a drive back in history. The entire area was the scene of fighting and military operations. 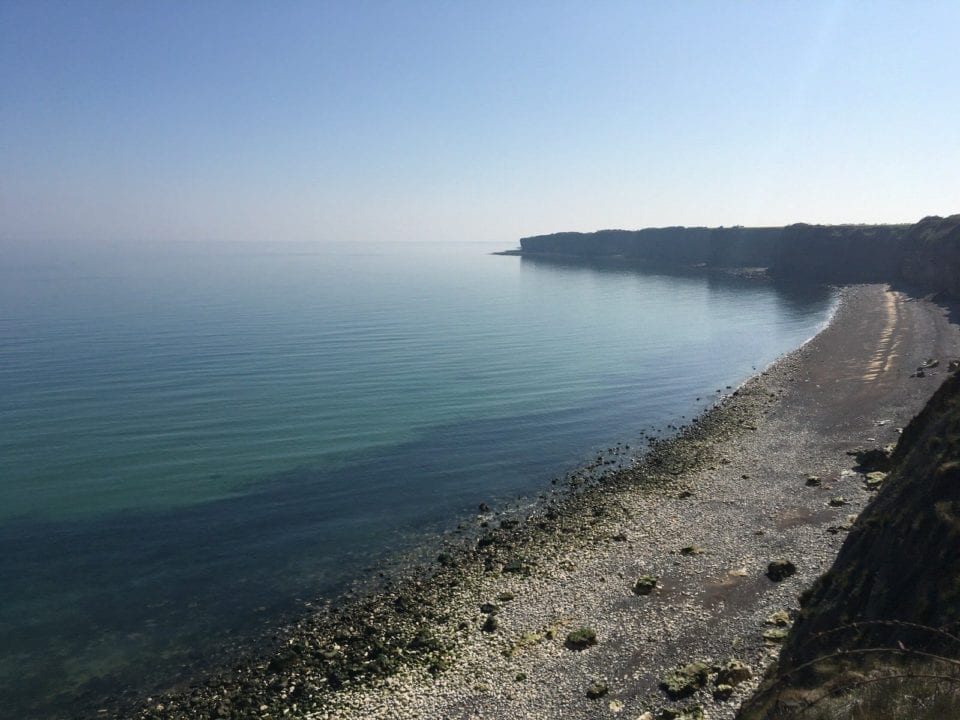 Arriving into the town of Normandy, the tone in the van was somber. Nobody was talking. I can’t think that anybody wouldn’t feel overwhelmed by visiting a place like this. To think what happened here on June 6, 1944, was incomprehensible. The bright sun and chilly wind on the day of my visit hid the truth of the horrible carnage that took place here in 1944. Allied Forces landed on several beaches in a campaign to end Hitler’s stranglehold on Europe.

We stopped at Utah Beach first. American troops landed here. We walked on the edge of the bluff overlooking the beach. The WWII barbed wire is still in place. Peering into the WWII bomb crater, now covered with grass made me feel the heartache of war. Old concrete emplacements now stand like ghosts in the chilly wind. The first thing that struck me was how beautiful the place was. The color of the water. The rocky beach below. The curve of the beach. The peaceful silence. Tears filled my eyes. I was overwhelmed by sadness. So many young men had fallen here.

Omaha Beach. American troops landed here as well. The tide was out, offering a full, spectacular sandy beach. I was walking on the beach the soldiers were fighting on. My eyes welled up with tears again—I was having a tough time keeping it together.

I walked about fifty yards onto the beach for a picture. I looked towards the seawall and imagined what it must have been like for the soldiers on that day. What did they see? What were they thinking? The men in the first waves never had a chance–very few survived the German machine gun fire strafing the beaches. Many of the men landing on the beach had no weapons, as many had sunk in deep water and had to jettison their equipment, including their weapons. When they managed to pull themselves onto the beach, many lay exhausted and became sitting ducks for the German machine gun fire.

That day in 1944 men died so that people like myself could carry on in their routines, bathed in the glow of freedom and safety. I felt guilty in a way. Many of the men in the first few waves knew they would die, but many didn’t. I thought about the soldiers’ mothers. The moms who saw their kids go to war and never return. The scenario repeated, time after time throughout history. I’ve been to several battle sites before—Pearl Harbor and civil war sites on the east coast. But those visits didn’t affect me emotionally the way this one did. I’m not quite sure why.

THE NORMANDY AMERICAN CEMETERY AND MEMORIAL

The American Cemetery and Memorial on 172 acres sit high on a bluff overlooking Omaha Beach. It serves as a burial site for over 9,000 American soldiers. I’m wiping tears from my eyes again. As I entered the grounds, I looked across to the sea and was struck by how the ground seemed to vanish before my eyes into the sea. It was if the cemetery had a view of eternity itself. Yes, the tears flowed again. This was no illusion. The architects had seemingly designed the cemetery to create this effect. 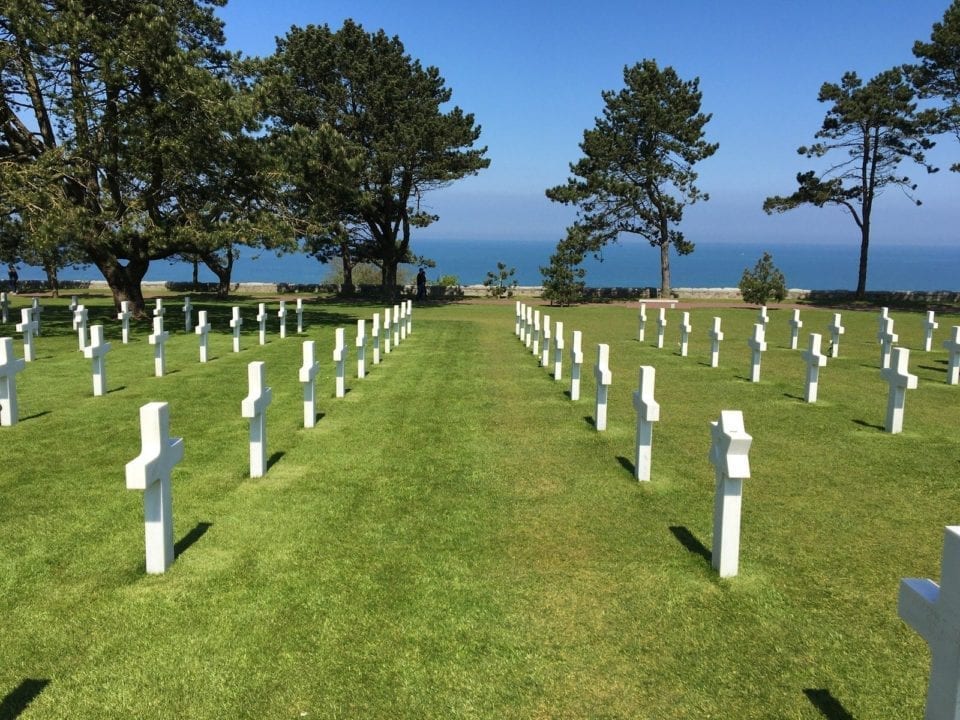 Row after row after painful row. The grounds were immaculate and beautiful. Flowers. Trees. Lush grass. Stately hedges. The peacefulness and serenity of the place eased my pain, as it was a fitting place for the brave men and women who rest there. I felt honored to be there, but at the same time, I felt like I was intruding. I spent no more than fifteen minutes at the cemetery. It was too painful for me. I walked back to the van, relieved that I was leaving since it was more than I could take. I’ll never forget what I saw there. Ever.

War takes a terrible toll, but the bravery of Allied Forces on that day bought something that no amount of money could ever buy—freedom.

READ ABOUT THE INVASIONS BEFORE YOU GO

Aside from the emotions that Normandy evokes, you can’t go away not feeling honored and proud to have visited the site. I consider it to be one of the ten “wonders of the world.” I recommend reading the book D-Day by Stephen Ambrose. The book is a highly detailed account of the D-Day invasions. You’ll learn how the about the plan, attack, and the mistakes that the Allied Forces made as well as the German troops. It’s one of the best books I’ve ever read!

Did you know that Ernst Hemingway landed during the seventh wave on D-Day? He worked as a reporter for Collier’s magazine at the time. He also served as an ambulance driver during World War I. I felt I know Hemingway now, as I also visited his old home in Key West, Florida.

Recommended side excursions: Overlord Museum. This museum houses a collection of equipment used by the troops during the invasions, including vehicles, firearms, uniforms and sundry battle gear. You can’t miss this while you’re there. It’s just a short drive from Omaha Beach, and the admission is cheap.

Travel Tip: In foreign destinations, learn about transportation and the most affordable and best value before you visit.

Hello, my name is Jim. I live in Bellevue, WA. I'm a solo traveler, who loves budget travel. Any adventure is good if it's cheap. I like to tag along with other people if they help do the planning. Drench my food in hot sauce, lettuce is my primary vegetable, I eat to live. I have no pets.